Silicon Valley-based clean technology company, Bloom Energy has just announced a product that they have been developing for the last 8 years, which could provide clean energy from a box. Incorporating twenty years of research by ex-NASA scientist, KR Sridar, the Bloom Box is a new type of fuel cell technology, that its manufacturers and backers claim could eventually replace the power grid infrastructure, by placing a small box in the back garden of every home.

The Bloom Box is a steel cabinet, that is insulated and contains a number of small fuel cell cubes. Inside the Bloom Box are the fuel cells blocks. These cells are cube-shaped, and comprised of layers of individual fuel cell disks, separated by metal alloy plates. The card-like fuel cells are ceramic and created from ordinary beach sand. One side of the card is covered with a special green coating, the other side with a black coating. When stacked together, separated by the metal plates, the cards form a single fuel cell cube.

The fuel cell of the Bloom Box operates by combining oxygen and fuel. Each individual fuel cell plate operates like a battery. Oxygen is pumped through one side of the cell, and fuel through the other, creating a chemical reaction that produces energy. One single fuel cell plate generates about as much energy as it would take to power a light bulb. The fuel cell plates can then be stacked together, in order to create a sort of generator, that runs on many different types of fuel. The fuel required to run a Bloom Box is either fossil fuels, like natural gas, or gas from renewable sources like landfill gas or bio gas. (Stahl) 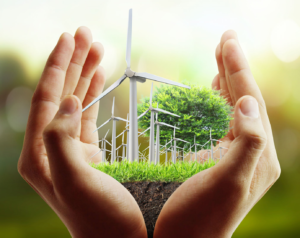 The current model, however, is designed for business. It is about the size of a refrigerator, and has been manufactured to supply enough power to fulfil the needs of a 7,500 square foot office. Four Bloom Boxes together, can be combined seamlessly to create a single power supply, providing enough power for a 30,000 square foot office. The four Bloom Box unit combination can power an entire corporate data center, as Bloom Energy has proven with an experimental installation at Google’s California campus.

The current Bloom Box costs between $700k-$800k. Bloom Energy currently has boxes installed at 20 large company sites, including Fedex, Ebay, Staples, Wal-Mart and Google. The enticement for California companies at the moment, is that 50% of the cost of the Bloom Box is currently offset by a combination of state subsidies and federal tax breaks. Ebay has five boxes installed at their San Jose campus, supplying almost 15% of the electricity required to run the site. A spokesman for Ebay claims that the boxes have saved the company over $100,000 in electricity costs over the first 9 months of their installation and are far more efficient than the 3,000 solar panels installed on the company’s roof. (Stahl)

While the cost of the Bloom Box is still too high for the ordinary consumer, corporations are able to take advantage of the technology through the use of green energy grants and subsidies. It is speculated that if the uptake of the Bloom Box is sufficient, this will allow the price of manufacturing the fuel cells to come down and the rate of production to increase (currently the company produces one Bloom Box per day). Bloom Energy’s goal is to reduce the cost of the household model to around $2,000, and Mr. Sridar’s aim is to have a Bloom Box in every home around the world, including in 1.5 billion people in developing companies where the current power grid infrastructure cannot reach. (Chalakuzhy)